On October 22, more than 30 descendants of Cherokee Moravian students, who attended Salem in the 19th century, came to campus for a celebration to commemorate their ancestors. This remarkable day was made possible by Anna McCoy Smith C’98 who has spent years researching the ties between the Cherokee Nation and the Moravian Church. The commemoration was originally planned for last year as part of the 250th celebration of the founding of Salem Academy and College, but it was postponed due to the COVID-19 pandemic.

The connections between Salem and the Cherokee Nation run deep. Before serving as the Academy’s second inspector from 1806 until 1816, Abraham Steiner was instrumental in establishing the Moravian mission in Spring Place, Georgia. Cherokee families at the mission, including leaders of the Cherokee Nation, sent their daughters to be educated at Salem. The stories of Sarah Ridge Paschal Pix, daughter of Major Ridge, and Jane Ross Meigs Nave, daughter of Principal Chief John Ross, were highlighted in Francis Griffin’s Less Time for Meddling: A History of Salem Academy and College 1772–1866, first published in 1979. Due in large part to Anna Smith’s work, we now know the names of 11 additional Cherokee students between 1823 and 1870.

During the Saturday celebration, Salem Academy and College Archives and The Moravian Archives for the Southern Province exhibited a wide range of 19th-century material related to the Cherokee students, including letters, textbooks and the account ledgers. Old Salem Museums & Gardens and MESDA also opened some of their exhibits for our guests.

The main ceremony began with remarks by President Summer McGee, Chuck Hoskin, Jr., Principal Chief of the Cherokee, Mr. Jack Baker, President of the National Trail of Tears Association and The Rev. Dr. Neil Routh, President of the Provincial Elders’ Conference. Chief Hoskins and Elizabeth Wheeler A’24 unveiled a plaque with the names of the 13 students. The plaque now stands in the courtyard behind South Hall, which served as the Academy residence for the Cherokee students in the 1800s. 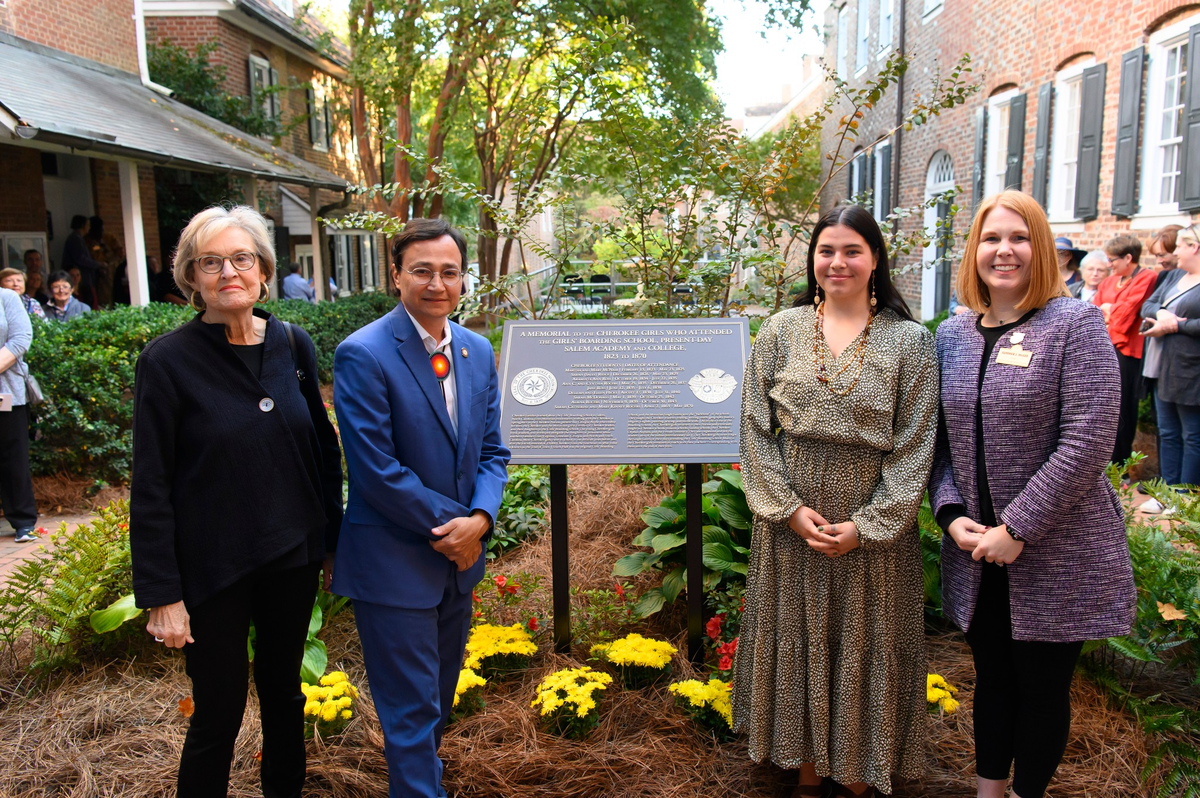 Elizabeth Wheeler A '24 with Anna Smith, Chief Hoskin, and President McGee, next to Cherokee Commemorative Plaque

Anyone interested in reading more about the Cherokee students of the 19th century may purchase the reprint of Less Time for Meddling: A History of Salem Academy and College 1772–1866, published for the 250th anniversary of Salem with an addendum about African Americans and Cherokees at Salem.