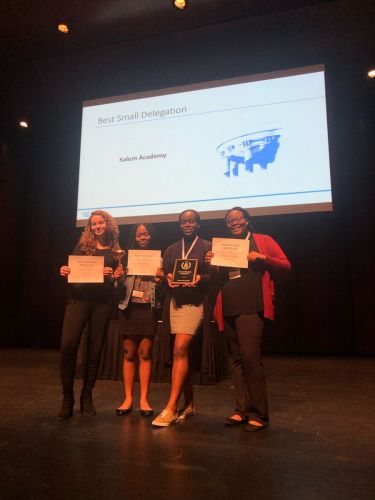 Salem Academy’s Model United Nations Club competed in the annual Model UN conference at the University of North Carolina at Chapel Hill (called MUNCH) from February 21-24. Ten students were divided into seven delegations. They represented nations such as Germany, Brazil, and Madagascar, and participated in various crisis committees including Press Corps, the Democratic National Committee (DNC) for the 2020 presidential campaign, and the current crisis in Venezuela.

In addition to these individual awards, Salem Academy also won the Best Small Delegation award, which was presented for the performance of the entire Salem delegation at the conference. It is the first time that Salem has won the first place school delegation award at the UNC conference. All ten students performed extremely well and impressed their committee chairs with their poise, speaking skills, and knowledge of their assigned topics. Their performance was especially impressive given the record number of students who attended the conference – over 750 students from dozens of high schools in the Southeast. Salem Pride!

Keynote Address and Panel Discussions to Highlight the Work of Women Health Leaders Who Are Widely Recognized Experts and Innovators.